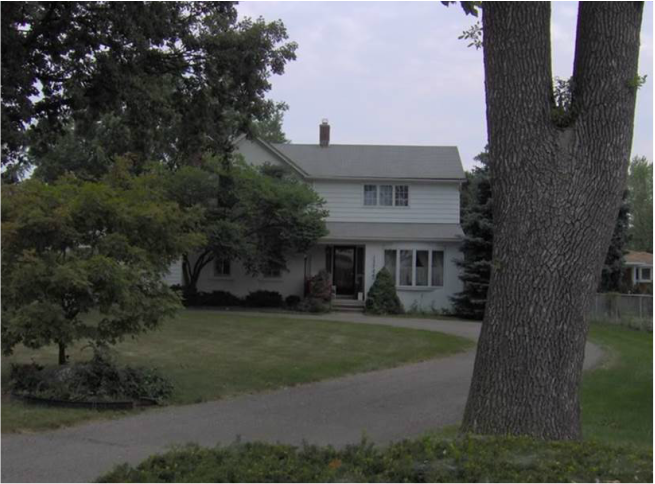 
Thomas Jefferson Anderson Jr., was born November 21, 1919, in St. Joseph, Missouri, to Thomas Jefferson Anderson Sr. and Hazel G. Shultz Anderson. The family moved to Michigan when Thomas was a young man.
On June 27, 1942, Thomas Jefferson Anderson Jr. married Margaret, daughter of John and Christine Van Costendorp in Detroit. He served in the United States army during World War II and during the Korean War. He received an engineering education, and worked as a supervisor of publications and automotive assembly problem control at the Ford Motor Company.
A man of varied interests and talents, Thomas Anderson was a director of the Southgate Bank and after five years as Ecorse Township Supervisor, he became Southgate’s first Mayor, serving from 1958-1961. He served as a member of the Michigan State House of Representatives, 28th District from 1965 to 1982 and was a delegate to the Democratic National Convention from Michigan in 1984. He was a member of the Kiwanis Club and the American Legion.

In the late 1960s and early 1970s, Thomas Jefferson Anderson played a key role in developing and passing environmental legislation that established the state of Michigan as an international leader in protecting the environment. This legislation protecting the environment included the Michigan Environmental Protection Act of 1970, which he and Professor Joseph Sax of the University of Michigan jointly authored, setting the standard that a healthy environment is the legal right of every citizen. This Act empowers a citizen, village, township, or city to suit any person, corporation, or governmental unit to protect air, water, and other natural resources. The Michigan environmental Protection Act of 1970 provided a model for legislation across America, including the National Environmental Policy Act.

Although he was a Democrat, Thomas Jefferson Anderson considered conservation nonpartisan and he worked alongside Republican governors like William Milliken to protect and enhance natural resources Representative Anderson helped create and guide into law the Inland Lakes and Streams Act, the Natural Rivers Act, the Wetlands Protection Act, and the Recreational Land Trust Fund Act. He also was instrumental in passing the Michigan dunes protection, endangered species, and wilderness protection acts.

In 1970 and again in 1980 the Michigan United Conservation Clubs honored Thomas Jefferson Anderson, naming him Legislative Conservationist of the Year in 1970, and Michigan Conservationist of the year in 1980. The U.S. Environmental Protection Agency awarded him its Environmental Quality Award.
The Detroit Free Press summarized Thomas Jefferson Anderson’s commitment to conservation. In an editorial, the Free Press said that he “displayed a passion for preserving Michigan’s environmental treasures, adding that he “understood that environmental quality and balanced economic development are complementary rather than conflicting objectives.”

In 1982, when Thomas Anderson decided not to seek a tenth term in office Detroit Free Press outdoor writer Tom Opre wrote that “Tom truly qualifies as a gentle giant. A giant because at six-foot-six, he towers over most other people he meets. Gentle because he has always been a gentleman.”
​
When Thomas Jefferson Anderson died of a heart attack on September 18, 1994.  Glen Sheppard wrote one of the many tributes acknowledging his accomplishments that was first published in the North Woods Call.  Two lines from the tribute, summarize his impact:   “Anderson was known for his patience and persistence. When others lost their temper or commitment, Anderson could be counted on to soothe emotions or rekindle the flame. “ [1]

Lansing, Mich. (AP) A Southgate legislator wants to make it easier for companies to obey Michigan environmental laws by streamlining the bureaucracy that administers those laws. State Rep. Thomas J. Anderson said he will ask for House approval of a news legislative committee to review the way the state protects its natural resources. Anderson, chairman of the House Committee on Conservation, Environmentalism, and Recreation said his move should not be seen as an indictment of the Department of Natural Resources or of the state’s environmental laws.

But, the Democrat said, there is frequent confusion and delays in various state agencies, particularly when companies try to meet requirements for numerous permits

Lansing (AP) Democratic and Republican tax neotiators planned a meeting today, after two wearing days and nights of debate proved the futility of trying to reach bipartisan fiscal agreement on the floor of the House.

Democrats said the Republican tax package hooking an income tax with a $600 exemption and no sales tax cut to raise money for among other things, property tax relief – amounted to taxing the poor to cut taxes of the wealthier.

The House is evenly divided between the two parties 54-54, thus neither can pass or amend a bill without at least one vote from the other. Some amendments to the bill were adopted. Two changes deleted provisions exempting from the proposed income taxes financial institutions and insurance companies not based in Michigan, but doing business in the state. Some members said they didn’t know why the insurance firm section was in the bill in the first place and added that when they tried to find out what would be the effect of removing it, they were told the information wasn’t available anywhere.

“When I was a boy,” said Representative Thomas Anderson, D- Southgate, “my daddy told me the best way to catch a gopher was to blow some smoke in his hole.  Maybe if we adopt this amendment we can smoke out what we want to know.”

Lansing (AP) Rep. Thomas Anderson, D-Southgate, today said a recently enacted law would cut down on motorists who pass school buses that have stopped to pick up or discharge children. The new law permits school bus drivers to take down the license number of the offending car and the owner will be cited for the violation.

An owner can avoid prosecution by showing that he was not the driver at the time of the incident, Anderson said. 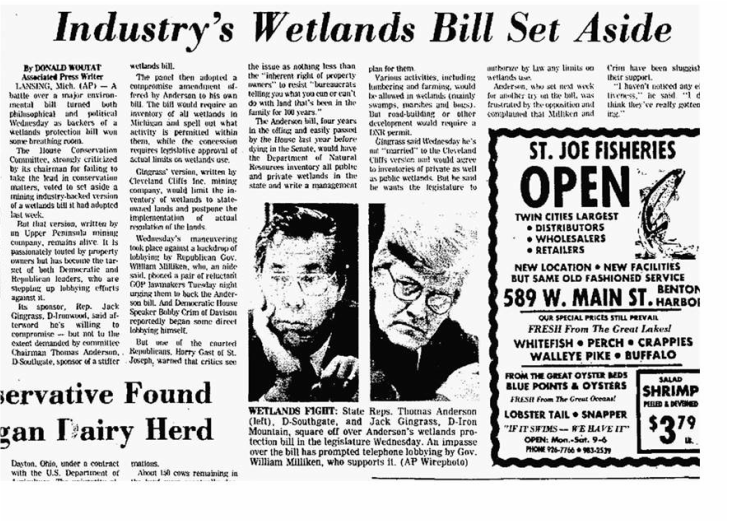