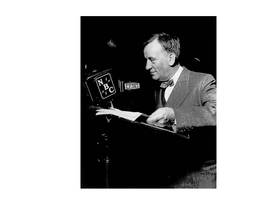 “I would not know too much—too much to smile
At trivial errors of the heart and hand,
Nor be too proud to play the friend the while,
Nor cease to help and know and understand.”

From The Simple Things, by Edgar A. Guest

As well as Ralph Waldo Emerson, Michigan poet Edgar Albert Guest and my beloved Grandmother contributed to my childhood tranquility and love of poetry. I can still see and hear her sitting in her rocking chair, light glowing like a sunset from her floor lamp, intently reading his poems to herself and out loud to me. I hear the pages of the Detroit Free Press rustling and her voice rising and falling with the cadence of the verses and I miss her and her gentle influence in shaping my emotional and intellectual life.

Emotions, especially those recollected from childhood, can sometimes be tricky when trying to think and write like an “adult.” In some quarters in today’s world sentiment and emotion, even in poetry, are intellectually suspect.  Then again, the poet Ralph Waldo Emerson said that poetry is “emotion recollected in tranquility,” without specifying the age of the tranquility or the recollector and the nature of the emotion. I decided to revisit Edgar A. Guest, who languishes in one of my memory cubbyholes titled “Do not open. Language flowery and Nostalgia rampant”.

As an adult I learned more about Edgar Albert Guest, who was called the “People’s Poet,” and who the Michigan State legislature appointed as the only official Poet Laureate of Michigan. Some critics from the 21st century evaluate his poetry as contrived, trite, and mediocre, belonging only to the first half of the twentieth century and forgotten by modern generations. Reading the poetry of Edgar Albert Guest as an adult provides me with a deeper connection to my grandmother and a better understanding of his themes and the appeal of his poetry.

A summary of the life and career of Edgar Albert Guest is inseparable from his poetry. After less than a decade as a reporter at the Detroit Free Press, he contributed a new poem to be printed every day, and over his 60 year career he published more than 11,000 poems. His poetry columns were syndicated and printed in hundreds of newspapers.  He sold more than a million copies of his more than twenty books and he hosted his own radio and television shows, earning a niche as one of America’s most famous poets. From 1952-1959, he served as Michigan’s only official poet laureate.

The delicious irony is that Edgar A. Guest hailed from Birmingham, England, not rural America. Born in Birmingham in 1881, he immigrated to Detroit, Michigan with his family in 1891, at the age of ten. When his father Edwin lost his job in 1893, Edgar, then 12, worked odd jobs after school, and in 1895 the Detroit Free press hired him as a copy boy. Edwin died when Edgar was 17, and he dropped out of school to work full time at the Free Press for nearly 65 years. By the end of 1895, the year he should have graduated from high school, Edgar Guest had established a reputation as a scrappy reporter successfully competing in competitive Detroit. In 1902, he became a naturalized citizen and in 1906, he married Nellie Crossman. They had three children, two girls and a boy.

By 1898, three years after he joined the Detroit Free Press, Edgar Guest had worked himself up to cub reporter and then to a position in the news department. He quickly learned the labor, waterfronts and police beats, working the 3 p.m. to 3 a.m. “dog watch.”

Edgar Guest always remained a newspaper reporter at heart, taking pride in never missing a deadline and writing journalistic stories. In a 1939 Editor & Publisher interview he remarked, “I’ve never been late with my copy and I’ve never missed an edition. And that’s seven days a week.”

Despite his dedication to journalism, an experience in 1908 steered Edgar Guest toward writing the poetry that had always lived in his soul. One day in 1908, he stood in the rain as the solitary mourner for a journalist who had kept the faith of his craft, but had long been relegated to his newspaper’s morgue and forgotten. Edgar Guest resolved to capitalize on his love of verse and to specialize in writing verse so that he would not suffer the same fate.

Part of Edgar Guest’s job included assistant exchange editor, culling short clippings from other newspapers holding an exchange agreement with the Free Press to use as fillers. He discovered that many of these fillers were verses and he decided that it would be just as easy to write the verses himself instead of ferreting them out and clipping them from other newspapers. He submitted one of his own dialect poems to Arthur Mosley, who was the Free Press Sunday editor. Overlooking the youth and educational status of Edgar Guest, Sunday Editor Mosley published his poem in the December 11, 1898 Detroit Free Press.

Readers fell in love with the poetry of Edgar Guest. From that point on he contributed poems to the Free Press and eventually he wrote a weekly column called “Blue Monday Chat,” and then a daily column called “Breakfast Table Chat.” Eventually 300 newspapers syndicated his poetry.

Readers continued to demand Edgar’s poetry, asking where they could buy books of his verses. Edgar discussed the situation with his younger brother Harry who was a typesetter and they bought a case of type and developed a printing routine. On most nights after supper, Harry climbed the stairs to the attic to typeset Edgar’s poetry. Finally, after accommodating to the limits of typesetting- eight pages if the lines didn’t have too many “e’s”-and printing pages, Edgar and Harry produced 800 copies of a 136 page book that Edgar titled Home Rhymes. Home Rhymes is written in dialect and many of the poems in Home Rhymes as well as poems in his other books extol the virtues of country life, but just as many of his other poems are not written in dialect and address human relationships and the mechanics and meaning of everyday life.

Still working with the eight page model, in 1911, Edgar and Harry Guest published Just Glad Things, based on a press order of 1,500 copies. By 1914, despite Edgar Guest’s apprehension, they produced a press run of 3,500 copies which sold out in two Christmases. In 1916 It Takes A Heap O’ Livin’ sold more than a million copies and in 1917, Just Folks did almost as well. The popularity of Edgar Guest and his poetry helped create a weekly Detroit radio show that he hosted from 1931 until 1942 and then in 1951 he moved on to an NBC television series called A Guest in Your Home. He also recited his poems in halls and club rooms across America, including Detroit. For more than thirty years, the Detroit Free Press daily featured Edgar Guest’s poems on its pages and countless people from Detroit and throughout Michigan enjoyed his poetry and bequeathed that enjoyment to their children.

The Michigan Senate considered and adopted a resolution naming Edgar A. Guest the first and only Michigan Poet Laureate, a position he held from 1952 until his death in 1959. In 1952, the Michigan Senate made the appointment with its Senate Concurrent Resolution No. 38, which said that through the years thousands of Michigan residents had looked to his poems for moral support in troubled times and enjoyed his humor and homespun philosophy. The Resolution said that the poems of Edgar A. Guest both depicted the everyday lives of Michigan residents and reflected the founding principles of the United States.

Throughout the trials in his own life – his wife Nellie died in 1945, his daughter Florence at just one year and his daughter Marjorie at 15- Edgar Guest continued to express hope and optimism in his poetry and inspire others as well as himself. When he died on August 5, 1959, his family buried him in Detroit’s Woodlawn Cemetery. Judith Guest, his great-niece, is an accomplished novelist who wrote Ordinary People.

Robert Pinsky, another Poet Laureate but of the United States instead of Michigan, assessed the poetry of Edgar Guest, especially focusing on his famous poem called “Home.”  Edgar Guest wrote many of his poems in dialect, including his “Home,” dropping the “G”s in thousands of the words he used in his poems and deliberately misspelling words to sound more country and folksy. According to Robert Pinsky, Edgar Guest’s use of dialect is gently condescending, amusing, and reassuring to his readers as well as expressing nostalgia for a vanished, simplistic rural lifestyle. Edgar Guest did not write all of his poems in dialogue and the ones that he did have a voice and message, however quaint, of their own. Looking beyond the flaws – some of his poems do have singsong rhythms, flowery language, and just one level of meaning- but more of them explore and express the emotions of the human heart and the condition of being human. They are universal and until human nature changes radically, timeless. They are also wise beyond their time and place.

When I need to remind myself of the things that really matter in life in a heart instead of a purely intellectual way, I revisit the poetry of Edgar A. Guest. Thanks to my Michigan grandmother, I met him when I was a child and I have continued our relationship through the years.  I will not not forget him.

Find A Grave-Edgar A. Guest

I would not be too wise—so very wise
That I must sneer at simple songs and creeds,
And let the glare of wisdom blind my eyes
To humble people and their humble needs.

I would not know too much—too much to smile
At trivial errors of the heart and hand,
Nor be too proud to play the friend the while,
Nor cease to help and know and understand.

I would not care to sit upon a throne,
Or build my house upon a mountain-top,
Where I must dwell in glory all alone
And never friend come in or poor man stop.

God grant that I may live upon this earth
And face the tasks which every morning brings
And never lose the glory and the worth
Of humble service and the simple things.

Life Is What We Make It

By Edgar A. Guest

Life is a jest;
Take the delight of it.
Laughter is best;
Sing through the night of it.
Swiftly the tear
And the hurt and the ache of it
Find us down here;
Life must be what we make of it.

Life is a song;
Dance to the thrill of it.
Grief's hours are long,
And cold is the chill of it.
Joy is man's need;
Let us smile for the sake of it.
This be our creed:
Life must be what we make of it.

Life is a soul;
The virtue and vice of it,
Strife for a goal,
And man's strength is the price of it.
Your life and mine,
The bare bread and the cake of it
End in this line:
Life must be what we make of it.