Richard Leonard Rides a Storm from Michigan to Canada and Back 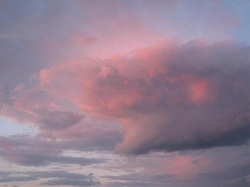 Richard Leonard hadn’t planned to be blown back and forth across Lake Erie in one of its fierce storms that broke on October 14, 1886. He didn’t think that he would ever touch land alive!

Richard Leonard of Newport, Michigan, experienced the frightening reality of the punch of a Lake Erie storm as it caught hold of his small scow, United States, sailing off Newport,Michigan, on Thursday, October 14,1886. Lake mariners later called this storm one of the worst storms ever to hit Lake Erie.

Other sailors besides Richard Leonard encountered the October 1886 storm. Captain Hoggof the propeller Lehigh, had left Buffalo on Wednesday, October 13, the day before the storm and was halfway across Lake Erie when the Thursday gale hit him. He said that in his thirty years of sailing the lakes he had never encountered such a storm. The wind blew at a speed of seventy five miles an hour and the rain fell in torrents. The wheelsman couldn’t control the wheel, and he lost his grip on it when the spokes on the foot and back hit him and disabled him for the trip. The force of the wind drove the Lehigh back sixty miles. The Lehigh arrived safely in Chicago on October 19, five days after the storm hit.

Shortly after the storm began on Thursday, October 14, the schooner O.M. Bond, built in Oswego, New York in 1873, crossed the bows of the Lehigh. Carrying 22,000 bushels of wheat, the Bond was bound from Detroit for Buffalo. A rapid shift of wind sent her on her beam ends and she lost one of her masts and two of her crew along with it.

According to a story in the Port Huron Daily Times, the O.M. Bond was driven ashore near Point Aux Pins, Ontario, with five crewmen still in the rigging. A local man in a skiff rescued the remaining five members of her crew. P. Ryan, the Mate and a sailor Joseph Hughes were drowned.

The Detroit Free Press of October 26 1886, reported that Patrick Ryan’s body from the schooner O.M. Bond which wrecked near Rondeau in the heavy storm of October 14, 1886, had been found floating east of the Rondeau lighthouse. The Free Press noted that the body was “in a good state of preservation.”

The George M. Case Was Also Bound for Buffalo

She foundered in a southwest gale three miles off Port Colbourne, Ontario. The tugs Boothand W.A. Moore picked up four of the crew from the spars, but Lake Erie claimed the other three. According to the Toronto Telegram, Mate John Prendergast and Seaman Charles Patterson, Seaman C. McCarty and Seaman Ole Uysted were saved. Captain Daily, and a sailor O’Green and a woman cook were drowned.

The Nevada Crew Reaches Port SafelyThe Nevada crew managed to survive the storm.A wooden schooner carrying coal, theNevada was upbound when the storm stripped her of her canvas and washed her into the shallows about five miles east of Ashtabula Harbor. The schooner Benson rescued her crew with a small boat after several rescue attempts from shore had failed.

The Belle Mitchell Goes Down With All Hands

All eight of the sailors from the Belle Mitchell succumbed to the storm. The Belle Mitchell, a wooden schooner, was built in 1874 at Algonac, Michigan and A.F. Barber of Clayton, New York and Captain Rushe owned the Mitchell. She was carrying a load of wheat bound from Toledo to Buffalo.

The Port Huron Daily Times of Thursday, October 21, 1886, reported that observers on shore saw her going to pieces off of Erie, Pennsylvania and the Port Huron Daily Times of Wednesday, November 3, 1886, said that a quantity of wreckage from the Belle Mitchell had washed ashore. The wreckage contained the body of the schooner’s cook, Mrs. Dick who was a sister of Captain Rushe, the vessel’s commander.

The Detroit Free Press of November 11, 1886, reported an observation from Captain Ellis, ironically from the steamer Belle Cross. The Belle Cross arrived in Buffalo on November 10, 1886, and Captain Ellis said that he saw the body of a man, mattresses and boat furniture in lake Erie four miles out from Dunkirk, New York. Captain Ellis saw the wreckage just before dark, but since he was encumbered with a tow and couldn’t stop to pick it up. Vessel men believed that the wreckage was from the Belle Mitchell, which went down in the fierce Lake Erie storm of October 14, 1886.

The Belle Mitchell was probably overwhelmed by the southwest gale about 22 miles from Long Point and her eight crewmen were washed away.

Richard Leonard. survived the storm. For two days and nights the storm tossed and turned his scow, the United States. Richard and his ship were blown from Monroe, Michigan, to Canada and back, finally arriving at the shore of Avon, Ohio. He said that from the first he gave himself up as doomed and at times the force of the storm terrorized him into unconsciousness. When his scow finally washed safely ashore, high and dry, he was astonished  and very thankful to wake up safely on the beach.

Canadian Department of Marine & Fisheries, Statement of Wrecks and Casualties, 1886.