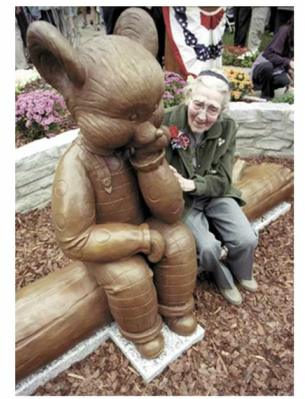 Monroe, Michigan is celebrating the bi-centennial of its founding next year. This is the first in a series of Monroe Memories historical portraits.
​
(A short poetry Cliff Note sequel to point you to
Little Brown Bear’s Christmas 1942)
Aunt Bett wrote a story about a Christmas tree,
Little Brown Bear, squirrel, rabbit, and chickadee,
Rode his red sled to the forest looking around
For a fir tree they could drag back into town…
(Keep reading to see if their story ends happily,
You can check out the book from the Dorsch Library!)

Story telling is as old as people, and Aunt Bett is an ageless story teller. Monroe Michigan’s most famous storyteller Aunt Bett, otherwise known as Elizabeth Upham McWebb told her stories into her nineties. Generations of her listeners and readers are still listening to Aunt Bett’s stories, although she is telling stories in heaven now.

Once Upon a Time in Michigan…
Aunt Bett learned the same lessons that her famous and most loveable character, Little Brown Bear, did in her stories about him in her own home. Her parents, Albert and Elizabeth Upham lived on a 300-acre farm in Flat Rock, when Elizabeth Norine Upham was born on October 20, 1904, the youngest of eight brothers and sisters. The 1910 United States Federal Census shows Elizabeth N. Upham living on South Macnab, (probably Macomb Street) in Monroe with her mother, father, and siblings Ruth, Edward, Ethel, Lorne, Lola, and Florence along with her grandfather Joseph William, age 79.

Elizabeth’s father Albert practiced storytelling and her mother Elizabeth, a Canadian-American, wrote poetry. Together they created a warm, loving, and possibilities atmosphere for their children.  Their daughter Elizabeth absorbed this atmosphere early in her life.  The dates of some of her childhood poetry reflect this early influence. Elizabeth’s family preserved a poem included in her letter to a teacher that Betty, as she signed it, wrote on September 23, 1915, when she was only eleven years old.  She told the teacher that a row of thorn apples stood on her pantry shelf and “although their few and scanty,” there were just enough for her to share with the teacher.  In the second verse, Betty tells her teacher that she has lots of love to spare and that she wants to share apples with the teacher. She ends the poem by saying that she hopes the teacher’s apple is not sour!

Her love of poetry and children motivated Elizabeth to enroll in the University of Michigan to prepare for a teaching career and in 1937, she accepted a position teaching elementary school in Lincoln Park Public Schools. On August 20, 1940, Elizabeth Upham married Canadian born farmer George “Mac” McWebb in Angola, Indiana. The newlyweds settled in South Rockwood where they operated a pharmacy for many years. Later they moved to a farm in Monroe that Elizabeth’s mother had left to Elizabeth and her brother Lorne.


Poetry, Prose, and a Petite Bear

Elizabeth McWebb’s imagination bubbled with stories to tell and she told them to friends and neighbors and children who flocked to the story hour at the Dorsch Memorial Library and to the Little Brown Bear House at the Monroe County Fair for generations. In the 1920s she wrote Prohibition poems like this one:

Once Mable found dear hubby Jack,
Rejoicing that whiskey was slack,
But when mending by chance,
She found in his pants,
Five tickets to Windsor and Back!

During their 28-year marriage, Mac supported Elizabeth’s storytelling and writing. He acquired a playhouse from the Church family in Trenton and brought it to their South Rockwood home where it sat in her yard for years and served as a magic story house for children. She kept a trunk in her attic filled with old clothes for children to play dress up, and according to first hand reports, her treats included popsicles and olive sandwiches.  From South Rockwood, the playhouse followed them to their farm home on South Monroe Street. When Elizabeth settled in her home on Tremont Street, she donated the playhouse to the Monroe County Fair. The Campfire Organization, the Monroe County Historical Society, and the Monroe County Library System helped her move the playhouse, which drew generations of children to the Monroe County Fair to hear her read and tell stories.

Aunt Bett’s numerous awards are stories in their own right. On May 25, 1978, the state of Michigan awarded her special recognition certificate. She received several certificates from the Monroe County Historical Society; awards from the Campfire Organization; the Monroe County Bar Association Liberty Bell Award in 1982; and the Cultural Affairs Award during Michigan Week in 1989.

In the late 1990s and early 2000s, several groups in Monroe and Monroe County including the Monroe Art and Beautification Fund Committee, (MABFC) decided that Aunt Bett’s years of dedication to literacy, to her writing and art, and to her community should be recognized. Since so many generations of children loved and remembered her Little Brown Bear stories, they decided to cast a 300 pound Little Brown Bear in bronze and give him a permanent home in front of the Dorsch Library so that Aunt Bet’s friends and his admirers could have their pictures taken sitting beside him.
Dundee sculptor Devon Vergiels built a mountain of volunteer hours over several months shaping the Little Brown Bear statue in a West Monroe storefront window. The clay she used, the metal frame holding the clay together, and the computer engineering creating the statue were all donated. Devon said that the entire project had been faster than anyone anticipated. “It should be at least a year project, and this thing has come together in six or seven months.”

MABFC Committee member Bill Saul has a story of his own to tell about the casting of the statue. As Devon Vergiels sculpted the statue, Bill and another committee member, artist Dave Stahl, searched for a foundry capable of casting such a large statue. They found one in Petersburg, a small town on the River Raisin about 15 miles from Monroe. Daedalus Art Foundry owner Lynn Hayes spotted a book that Dave had tucked under his arm. She asked Dave what book he was carrying and Dave told her, “Little Brown Bear” and we are here to see if you can make a statue for Aunt Bett. “
Lynn told them that her mother had read her the Little Brown Bear books when she was a little girl in New York and that she had a shelf full of Aunt Bett’s books over her bed. She had no idea that Aunt Bett lived in Monroe. When she recovered from her astonishment, Lynn said that casting a statue of Little Brown Bear for Aunt Bett was a special opportunity. At the end of Lynn’s casting work, her mother became ill and she closed the foundry. Her last work was Little Brown Bear.

The Monroe Evening News and the Toledo Blade featured stories about the dedication of the statue of Little Brown Bear on Sunday, October 7, 2002, Over 300 people attended the ceremonies outside the Dorsch Memorial Library where Little Brown Bear sat with his chin resting in his paw.

Tributes to Aunt Bett piled up like presents under Little Brown Bear’s Christmas tree. Statue sculptor Devon Vergiels said that “there is no one more deserving of this than Aunt Bett.”

State Representative Randy Richardville of Monroe remembered Aunt Bett reading to him at the Dorsch library when he was a child. He said, “Monroe stands on the shoulders of a giant and that giant is Aunt Bett.  You helped bring out the child in all of us…”

Many other adults who had grown up with Aunt Bett reading to them came to tell her what her reading and writing had meant to them as they grew up as well as groups of contemporary children seeking her autograph, a hug, and some of Aunt Bett’s famous verses. Monroe Mayor C.D. (Al) Cappuccilli gave Aunt Bett the key to the city of Monroe. First Lady of the United States Laura Bush sent her a letter, and people from all over the country wrote her letters and flowers. On October 3, 2002, Congressman John D. Dingell of the United States House of Representatives read a resolution honoring Elizabeth Upham McWebb, Aunt Bet, for her contributions to literacy, children’s literature, and to her community of Monroe, Michigan.

Aunt Bett’s reactions to these tributes ranged from “Oh my,” to “I feel like a rock star,” to “I don’t deserve all of this.”
After the ceremony, Aunt Bett sat on the log next to Little Brown Bear, and put her arm around his bronze shoulder. “He’s very well behaved,” she said.

The End of One Chapter and the Beginning of Another

The Monroe Evening News of January 30, 2004 published the news of the death of Elizabeth Upham McWebb, at age 99, reporting that she died at 2:14 p.m. on Thursday, January 24, 2004, at Tender Care of Monroe. Reverend Dean McGormley and Reverend Ellen McGormley, of the First Presbyterian Church officiated at her funeral services. She is buried alongside her husband and daughter in Woodland Cemetery in Monroe. Her nephew Norman Friedline of Rapid River, and three nieces, Jeanne Cominess of Monroe, Barbara Crocker of Rockwood and Patricia Wiegerink of West Branch survived her.
Aunt Bett bequeathed her gifts of imagination and storytelling to generations of children and adults, the most magical Christmas legacy that anyone can give.

The end Cliff Note of the poetic Little Brown Bear
Read Aunt Bett’s story to take you there.
Little Brown Bear imagines the fir tree parlor sitting,
While papa reads the newspaper and mama keeps rocking and knitting,
The fir tree convinced Brown Bear and his friends to wait,
When they started to drag it to town to decorate.
Instead, they brought ornaments to the fir where it stood,
Curled cranberry chains and a bright star looked good.
Forest creatures gathered in the warm sun,
Throwing popcorn chains at everyone.
Brown Bear imagines Aunt Bett spinning her stories still
Wishing everyone a Christmas full of joy and goodwill.


Monroe and Monroe County is celebrating its bi-centennial in 2017.  Here is a link to my Bi-Centennial blog, Monroe Memories and More focusing on city and county history,
​​https://monroemichigan.wordpress.com/