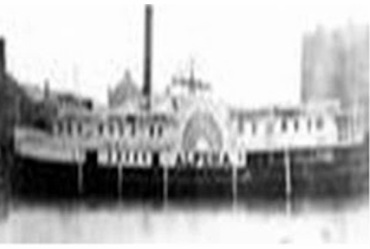 In October 1880, a monster autumn storm struck the American Midwest. After it sank the Lake Michigan steamer Alpena, sailors named it the “Alpena Storm.”

In the golden late summer days of 1880, the Lake Michigan steamer Alpena was dry docked in Milwaukee. Repair crews fixed her rudder chain and made her generally shipshape for her run from Chicago to Grand Haven, Michigan, with stops at Milwaukee and other Wisconsin ports in between.

Just a month later, the Alpena would be resting on the bottom of Lake Michigan because of an early winter storm that ravaged the entire Midwest.

On this warm autumn day, winter and its storms were far away from the thoughts of the repair crew and bystanders as they stoodin the sunshine admiring the Alpena. She was a single stacker side wheeler, considered to be the best on Lake Michigan. She measured 175 feet long and had a 35 foot beam. According to the old salts, she looked “like a white swan on the water.”

After a few more days of work, the repairs on the Alpena were finished and she made the journey to Grand Haven, Michigan smoothly. Her captain was Nelson Napier, a veteran of many lake voyages and a jolly, easygoing enough man not to let Lake Michigan’s many moods influence his cheerful attitude. At Grand Haven, he took on about 50 passengers, including the editor of the Grand Haven Herald, W.S. Benham, and his wife, and John Osborne and his wife and three children from Chicago.

Along with his 25 member crew, which included clerk, Arthur Hayes, steward William Shepard, and purser, Alfred Haynes, Captain Napier had a full roster of between 75 and 100 people on board when he left Grand Haven for Chicago on the night of October 15, 1880. He anticipated that this would be “another routine run” for the Alpena.

“Another Routine Run” from Grand Haven to Chicago

As the Alpena churned over the dark, smooth waters of Lake Michigan, a storm brewed in Nebraska that would have a devastating effect on the ship. The temperature in Nebraska dropped far below zero and a gusty wind developed. It grew in strength until it transformed itself into a howling 125 mile per hour wind storm.

The next day, October 16, 1880, the wind from Nebraska blew around the Alpena as an early morning squall. By that afternoon the squall had turned into a hurricane and when darkness came, the storm escalated to shrieking fury. The temperature dropped suddenly to 27 degrees below zero and sleet and snow lashed the Alpena. Captain Napier stayed at the rudder of his sturdy ship, guiding her through the storm. He was concerned, but he was also confident that he could steer her through to Milwaukee.

The “Alpena Storm” Increases Its Fury

On shore in Illinois and Wisconsin, the wind blew about 125 miles per hour. Only a few inches of snow fell, but the high wind drove it with such force that railway cuts and most roads were packed in with drifts. Traffic in Milwaukee and Chicago came to a complete standstill. Rescue parties in sleighs and sleds floundered to stalled trains with food and blankets. The windows in many Milwaukee and Chicago homes were broken by the force of the wind, and many people shivered in front of their fireplaces and coal stoves.

The storm vented its full fury on Lake Michigan as Captain Napier battled to keep the Alpena ship afloat. The surface of the lake boiled and ships which had not scurried for safe harbor were tossed about like feathers in a gale and the waves swallowed many of them.

The ship Hattie Wells, captained by John Dearkoff, tossed and turned near the Alpena as the storm grew worse, and Captain Dearkoff decided to run for the harbor at Milwaukee. Later, he said that he thought that was what the Alpena would do, but apparently Captain Napier had something different in mind. By now, the wind had formed a giant sledge hammer battering the Alpena, and Captain Napier decided that he could not make Milwaukee, even though he was about halfway through his regular run.

“I don’t know why he didn’t head for Milwaukee like I headed for Milwaukee,” Captain Dearkoff of the Hattie Wells, said in his eyewitness account of the incident. “Me and my crew stood on deck and watched him try to turn his ship around in that storm. She was halfway around and that wind just took right hold of her and turned her over. She was swamped and she sank and we couldn’t do a thing about it. We watched her disappear under the waves.”

The passengers in their cramped quarters in the Alpena’s cabins were thrown violently back and forth as if a huge fist were shaking them. Then they were swamped by sheets of icy, cold water. For two days after she sank, the fate of the Alpena remained a mystery. Then a ship picked up a ladder and a pail with the name Alpena marked on them, floating near Holland, Michigan.

A water soaked note was found in a piece of wooden molding in a part of the cabin that washed ashore. The note said that the Alpena was sinking, Grand Haven to Chicago. The signature looked like that of George Connell, but it was really too waterlogged to read. The scattered wreckage and the two bodies were all that remained of the Alpena and passengers. The old salts of Lake Michigan speculated that the rudder chain of the Alpena broke again, leaving the ship at the mercy of the waves. Many of the passengers on the Alpena were unknown and unmourned because some were pioneers coming to settle in Wisconsin and were without friends. Others had no one to identify them.

The storm that caused the sinking of the Alpena blew for three days over the Great Lakes. This mid-fall blizzard covered a 500 square mile area, including parts of Nebraska, the Dakotas, Minnesota, Iowa, Wisconsin, and Northern Michigan. It deposited several inches of snow on city streets and in country glens alike, damaged property, and destroyed vegetation. It was the forerunner of what the old timers called “The Winter of the Big Snow.”  Late in March of 1881, when three days of nonstop, heavy snow heaped up drifts 40 feet high and people huddled around their firesides, they still spoke of the fall storm that sent the Alpena to the bottom of Lake Michigan.

The Alpena’s Name Board Washes Ashore

It wasn’t until 29 years later that the Alpena truly gave up her last ghost. In an ironic twist of fate, on Saturday, January 16, 1909, the side-wheel name board of the steamer Alpena was found at “Alpena Beach,” a beach near Holland, Michigan.