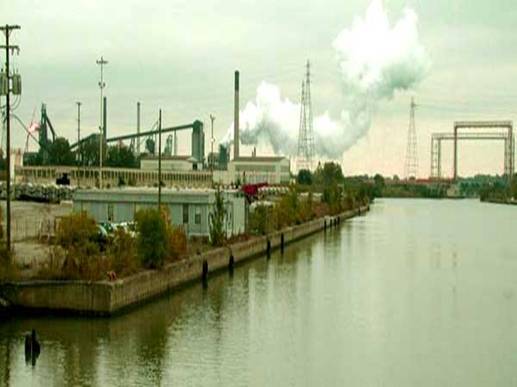 
In December 1949, the Ecorse-River Rouge Advertiser summarized some of the news of the year for River Rouge.

After spending over 86 of her ninety years in River Rouge, Mrs. Lumnia Grandmason, 142 Division Street, died at her home.

Mrs. Grandmason celebrated her 90th birthday on June 14, 1949. She died just four days later. She was born and raised in Canada.

Well deserving to be called one of Downriver’s old timers, Mrs. Grandmason was the wife of the late Cyril. She is survived by a daughter, Mrs. Fred Metzger, also of the Division Street address, a son Roy, and two grandchildren.

Funeral services were held at the Gallagher Funeral Home.

July 28, 1949. River Rouge hit by flash flood as drains back up. Youthful gangs war in wild ride down Jefferson Avenue.

August 25, 1949. The body of Barbara Jean Aberl is found near Northville after murder by uncle.

The Ecorse-River Rouge Advertiser printed an editorial about the murder under the title of Horror. The editorial said that the murdered child, Barbara Aberl was pretty and loveable, the favorite of the entire neighborhood. The confessed murderer was “a young uncle, sick in mind.” He left a crude confession note urging capital punishment to prevent such crimes as his. The editorial said that “to his confused and tortured mine, capital punishment would have stayed his hand.”

The editorial continued that no law would stop the killers. The only thing which will stop such hideous crimes is the discovery and treatment of these mentally sick before they commit crimes of violence. When such crimes are committed the public is aroused but it does little to prevent them. Hospitals where they can be treated and cured is the only answer to the problem. Unfortunately there are no hospitals for such individuals and they can only be sent to penal institutions after committing some crime.

The editorial concluded by saying that: although mere commitment to a prison does not cure them, it protects helpless children and very fortunately many of these potential murders are sent to prison before they have a chance to commit murder.

Society may someday realize that the sick, whether physically or mentally ill, should be placed in suitable institutions and returned to society only when they are cured.”