Hy Dahlka and The Detroit River 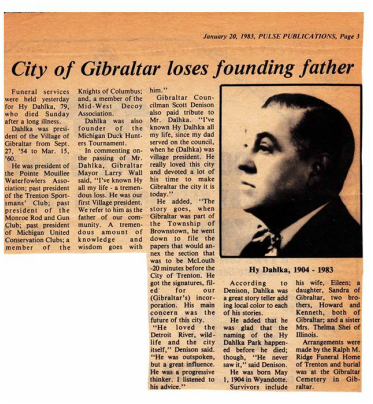 A story in the Ludington Daily News of October 7, 1967, fills in some of the background of the Annual Duck Hunter’s Tournament at Pointe Mouillee State Game Area.  According to the story, Detroit was once a world center for marketing game, supplying the White House and Buckingham Palace with canvasback ducks. The shooting grounds of the marshes and shoal water feeding beds of Lake Erie, the Detroit River, Lake St. Clair and the St. Clair River were prime hunting areas and a series of duck clubs drew their membership from the eastern third big cities of the continent. Percy “Hy” Dahlka’s Michigan Duck Hunter’s Tournament preserves the aura and lore of that era.[1]

French fur traders in the 17th century, wealthy 19th century duck hunters, and 20th century conservationist Hy Dahlka combined to preserve Pointe Mouillee State Game Area, consisting of 4,040 acres of coastal wetlands in Lake Erie near the mouths of the Huron and Detroit Rivers north of Monroe, Michigan. Most of Pointe Mouillee State Game Area lies in the northeastern corner of Monroe County, with a small area of land on the opposite side of the Huron River in Wayne County, but its headquarters are located on Mouillee Road in Brownstown Township. The game area is a traditional resting place for ducks and geese along the flyway across Lake Erie, as well as a haven for bird watches, bikers, and hunters. Muskrat trappers take a substantial number of muskrat from the area every year.

The 17th century French fur traders named the wetlands near the mouth of the Huron River, Mouillee, which means wet or moist. In 1875, a group of wealthy duck hunters from the area bought about 2,000 acres of the marsh and founded the Pointe Mouillee Shooting Club. The club grew prosperous enough to employ punters and cooks to attend the duck hunters. Responding to the   efforts of Gibraltar conservationist Percy “Hy” Dahlka and likeminded people, the state of Michigan bought 2,600 acres of land from the Pointe Mouillee Shooting Club and established the state game area. Gradually, they added more property to their initial purchase, including 130 acre Celeron Island. When the barrier island washed away, heavily damaging the marsh, the U.S. Army Corps of Engineers built a new island with materials dredged from harbors and shipping channels, materials considered so contaminated that they couldn’t be dumped in the Great Lakes. The Corps of Engineers built a Disposal Facility with 3.5 miles of dikes that enclosed 700 acres of marsh and doubled as barrier for the marsh, as well as rerouted streams and partially drained the marsh to help the vegetation reestablish itself.

Born May 1, 1904, in Wyandotte near the Detroit River, the 1920 and 1930 census records show that Hy lived in Trenton during his formative years. On the 1920 census, he listed his occupation as trapper and throughout his boyhood he learned to love the Detroit River, its marshes, the muskrat that lived among the reeds and the ducks and geese that flew in v shaped formations on their way across the Lake Erie flyway. Love of nature and survival motives compelled Hy to become an expert marksman early in his life. In an interview with Field and Stream over half a century later, he said that he shot for the market because his family needed the money and canvas back ducks brought a dollar each. He recalled that his brother reminded him that each duck was a dollar bill and to remember the 25 duck limit. [2]

Hy Dahlka became a confirmed duck hunter. Besides shooting ducks, he learned much about duck hunting methods and traditions and the lives and times of ducks. He developed his tried and true methods for picking ducks and argued the best method of preparing ducks for the table, the proper size of shot, duck boat making, and the ins and outs of federal regulations. He carved and painted decoys – more than 400 of them - and earned a national reputation for decoy making.

To support himself and his outdoor life, Hy worked as a salesman on shore and operated barges and dredges on the rivers and lakes of the region, continuing to enjoy his love of water fowl hunting, creating decoys, and exploring the Detroit River marshes. Despite his outdoor activities, he found time to court and marry Eileen H. Heisler on October 2, 1937 in Monroe, and they had their daughter, Sandra, less than a decade later.

Along about 1947, Hy noticed that the marsh lands along the Detroit River, especially at Pointe Mouillee, were growing as smaller as the birdshot some hunters used to bring down the ducks flying over the marshes. He discovered that wealthy men had gradually bought up a large part of Pointe Mouillee for a private shooting club and fenced in everything. Hy and a group of friends decided to fight for the marshes. He discovered that according to a Michigan Supreme Court ruling in the case of Hilt versus Weber, if titles to shooting club property were dry land grants, then the titles extended only to the water’s edge. Swamp land grants extended the area out to the meander line.

​Hy found that the club had dry land grants so they couldn’t control all of the water. He and his friends convinced the Michigan Conservation Commission to buy the land at $75.00 an acre, pricey since it stretched only 16 miles from the Detroit City Hall. He carved out the marshland now known as the Pointe Mouillee State Game Area because he felt that “the public had to know about waterfowl hunting and the marsh.”[3]

The Clare Sentinel of April 25, 1947, reported that the board of directors of the Michigan United Conservation Clubs held  its April meeting in Clare with headquarters at the Hotel Doherty. President Hy Dahlka “was accompanied by his wife and daughter Sandy who was born within an hour of Hy’s return home from a M.U.C.C. meeting two and a half years ago.”[4]

In 1949, Hy started the Michigan Duck Hunter’s Tournament, and went on to establish the Waterfowl Festival at the Pointe Mouillee State Game Area, and helped found the Michigan United Conservation Clubs, the Monroe Rod and Gun Club, and the Trenton Sportsman’s Club. Hy’s conservation efforts and activism didn’t escape the notice of Michigan Governor G. Mennen Williams, who approached him in May 1953 with a request. The Governor asked Hy who at this point was the former Michigan United Conservation Clubs president, and executive secretary of the Michigan Tourist Council Robert J. Furlong, to head a special conservation committee. The Committee was designed to iron out the differences or misunderstandings between resorters and sportsmen.[5]

Hy Dahlka also found time for his community. He was the first president of the Village of Gibraltar, serving from September 27, 1954, to March 15, 1960. Larry Wall, Gibraltar mayor in 1983, commented in Hy’s obituary that he was the first village president and considered “the father of our community.” According to Scott Denison, a Gibraltar Councilman in 1983, tradition had it that when Gibraltar was part of the Township of Brownstown, Hy went down to file the papers  annexing the section that was to be McLough thirty minutes before the City of Trenton. He got the signature filed for Gibraltar’s incorporation. “He loved the Detroit River, wildlife and the city itself,” Dennison said. [6]

A story in the Ludington Daily News of October 7, 1967, said that Hy had been mayor of Gibraltar, president of the Michigan United Conservation Clubs, and township trustee, but he took the most pride in being the permanent chairman of the Annual Michigan Duck Hunter’s Tournament. The Tournament attracted duck hunters with day long contests in the arts and skills of wildfowling as well as being a huge picnic. The Trenton Sportsman’s Club and the Gasco Sportsmen’s Club of Michigan Consolidated Gas Company sponsored the Tournament along with the Michigan Conservation Department.   The 1967 Tournament didn’t charge admission or entry fees and the program featured  a punt boat race, sneak shooting contests, retriever trials, decoy whittling and show, duck picking, duck calling, a hip boot dash through the marsh and rowboat races for men, women, boys and girls. Trophies and ribbons were awarded the winters and runners up and a grand championship award was presented at the end of the day. [8]

Field and Stream,   1975
The December 1975 issue of Field and Stream included a profile of Hy Dahlka, by Bill Tarrant, titled “Best Duck on the River.” The story identified Hy Dhalka as a noted conservationist, waterfowler, duck decoy carver, and founder of the Michigan Duckhunter’s Tournament.  In 1975, he lived in a two story clapboard house snugged against the Detroit River in Gibraltar. A yard of short cropped grass sheltered a statue of the Virgin Mother, a gleaming white washed statue surrounded by colorful zinnias, and below her on the ground rested a full herring gull decoy.

Hy Dahlka and a gray haired poodle greeted writer Bill Tarrant at the door. The gray haired poodle limped to greet Bill Tarrant, since Michigan State University veterans had repaired the tendons in his back legs by making two 58 stitch incisions and implanting synthetic substitutes. Hy remarked, “When I was 12, I used to ride my bike down to this very spot before sunrise. My Uncle Bill would take me out hunting.”
Noting that the living room windows looked out onto the Detroit River, writer Bill Tarrant visualized the magic of Hy Dahlka’s Detroit River marshes.  Strings of mallards draped the horizon, and clumps of diving ducks dotted the water.  A gentle breeze stirred the willow leaves and the wind rustled stories of hunters and guns and the whirr of wings and cries of birds through the Detroit River marsh reeds.

Bill Tarrant described Hy Dahlka’s living room as featuring knotty pine walls decorated with waterfowl memorabilia and decoys stacked on every surface. Plaques and decorations dominated the room. A blue ribbon said:  “Thanks to Hy Dahlka for 25 years. Midwest Decoy Show, Fall 1972, Pointe Mouillee. Given by the collectors and carvers to the Best Duck on the River.” A bronze plaque proclaimed:  “Michigan United Conservation Clubs, 1951.  Award of Merit to Hy Dahlka for outstanding service to the organized sportsmen of Michigan.”[9]

Shortly before he died in 1983, Hy Dahlka donated newspaper clippings, photographs, and an unpublished manuscript on regional waterfowling to Michigan State University Museum. The introduction to his collection describes him as an avid water fowler, a community scholar and activist who played a major role in the preservation of the Pointe Mouillee Game Area and the public recognition of Downriver duck boat making, decoy making and duck hunting.[10]

A plaque that members of his Michigan Duck Hunters Tournament presented to Hy Dahlka captured his impact on duck hunting, conservation, and the Detroit River. The plaque said:  “Michigan Duck Hunters Tournament, Pointe Mouillee, Presented to Hy Dahlka, tenant of rivers and marshes. His love of duck hunting nurtured in him an idea from which countless thousands have learned to respect, enjoy, and protect the art of wild fowling. From all your duck huntingfriends.” [12] 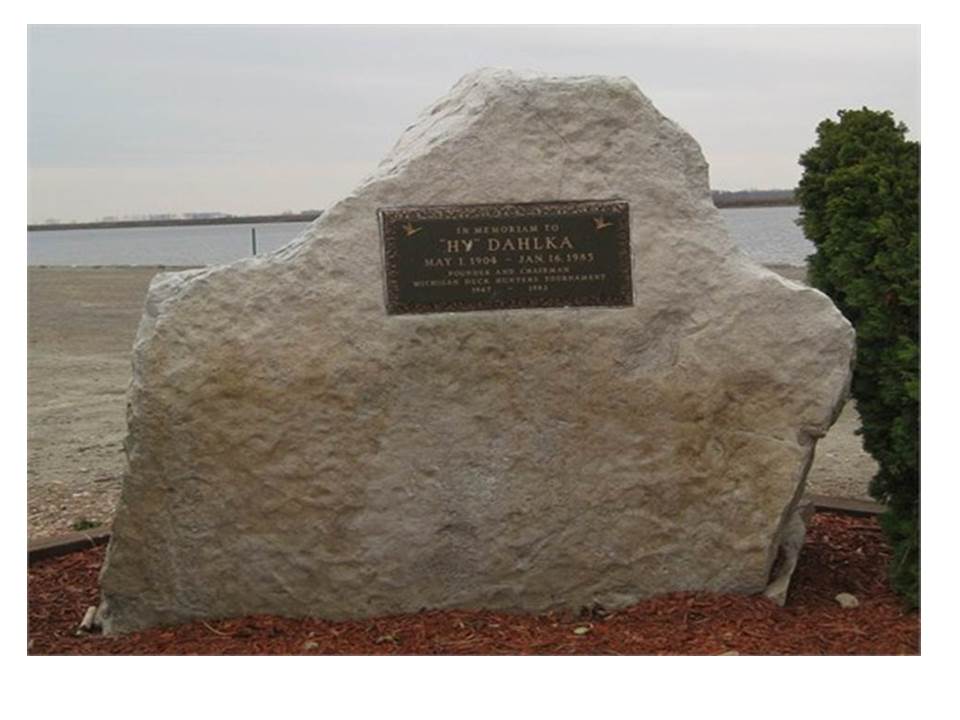