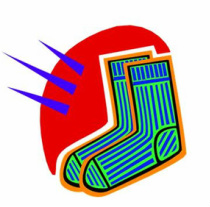 After a busy tree chopping day at Pinegreen Lumber Camp on the shore of Lake Superior Lenny the Lumberjack trudged through the woods to the log cabin that he shared with his partner Olly. The wind beat Lenny’s coat like a broom and snow slithered into his lumberjack boots. Lenny flung open the door and hurried to the fire. He sat on a log chair and pulled off his boots and socks. The socks stood straight up like Lenny’s feet were still in them. The toes pointed out like tree branches.

Olly brought him a tin washtub filled with hot water and Lenny plunked his feet into the hot water. “WHOOPPPP, that feels good,” he yelled. “Can you give me a little more hot water, Olly?”

When Olly poured hot water in the washtub, Lenny noticed something. “Olly, why do you have the clothespin on your nose?”

“Your feet smell, Lenny. You have to sleep out in the shed tonight and every night until your feet stop smelling. Even your socks stink! Avoid stinky socks, Lenny.”

The next day Lenny went into the woods for his chopping day wearing his lumberjack boots without any socks. “I’ll avoid stinky socks,” Lenny muttered.  Lenny didn’t hurry home down the trail that night with his axe over his shoulder. Instead he sunk his axe into a trail of trees and let it pull him along. Finally Lenny reached the cabin. “ Owwww,” Lenny said as he sank into his  log chair in front of the fire.

“Owwwww,” said Lenny. He looked around the cabin for something to use on his feet instead of socks. He saw the oilcloth hanging over the edge of the table. “I’ll use the tablecloth,” Lenny said as he pulled it off the table, dishes and all. Lenny cut the oilcloth in two and stuffed a piece inside of each boot.

The oilcloth turned Lenny's toes into ice chunks and birds hovered around him all day eating the crumbs that keep falling out of his boots. “Oilcloth doesn’t make good socks,” Lenny said as he walked home on his ice chunk feet.”

That night Olly counted 24 blisters on Lenny’s right little toe and 48 on his left. “But I avoided stinky socks,” Lenny told Olly.

The next day Lenny crawled into the woods without boots and socks. He picked some moss from the side of a tree. “Indians use it, so why I can’t I?” Lenny told a squirrel. He crawled back and got his boots and axe. He stuffed the moss inside of his boots and chopped his trees.

That night when Lenny sat in his log chair in front of the fire, Olly didn’t count any new blisters. The moss had even helped the old blisters heal. The moss and Lenny’s feet smelled like a blanket that someone had thrown over an angry skunk. “But I avoided stinky socks,” Lenny said.

“Think of some other way to avoid Stinky Socks, Olly begged him, holding his nose as he counted Lenny’s blisters. “I’ll hang this moss out on the clothesline like I used to do your Stinky Socks. Maybe the wind will blow away the smell.”

“I’ll think of something,” Lenny said. He put the moss on the floor.

Wrinkling his nose, Olly reached for the clothespins and then Lenny had an idea. “We can compromise,” he said.

Lenny picked up a clothespin and handed it to Olly. “Sleep with this on your nose until I can get to Gramonds General Store and buy you some nose plugs,” he said. “And I promise I’ll hang my socks and moss outside on the clothesline every night. Is it a deal?”

Olly clamped the clothespin on his nose. “Dit’s da deal,” he agreed.